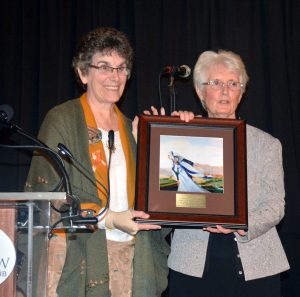 Generous. A gift giver. A saint

Those were some of the many accolades heaped on Sister Ave Clark, O.P., who received the St. Catherine of Siena Award from her fellow Sisters of St. Dominic of Amityville, L.I., at the annual Dominican Gala on Nov. 2.

Sister Ave was honored for the work of her Heart to Heart Ministry, based in Bayside, through which she conducts retreats and offers counseling in parishes in the Diocese of Brooklyn and throughout the New York metropolitan area.

About 300 people attended the reception at the Crest Hollow Country Club in Woodbury, N.Y.

Love, Given and Received

From the start of the festivities, Sister Ave could be seen welcoming the many attendees with enthusiastic hugs. She seemed to know each of them by name. And that energy came back to her tenfold.

“She sends out love and she’s full of love,” Pat Lannon said of the night’s honoree. Lannon, who grew up in Our Lady of Mount Carmel parish, Williamsburg, now leads the prayer group at St. Catherine of Sienna parish, Franklin Square, L.I., in which Sister Ave participates.

“She can meet complete strangers and take them into her heart,” Lannon added.

Sister Ave felt the love and gave it right back. “It’s a humble, wonderful, holy feeling,” she said of being honored, “with all the memories I have of what I’ve learned from all of these people.”

To Giulia Dimilta of Immaculate Conception parish in Astoria, that was classic Sister Ave.

“She teaches you to do everything with love,” Dimilta said. “Just her voice alone is soothing and so calm.”

Before recognizing Sister Ave, the gala honored Al Roker, the meteorologist on NBC News’ Today Show, with its Veritas Award. Roker could not attend the dinner but sent a video thanking the Dominican Sisters who taught him at St. Catherine of Siena’s elementary school in St. Albans.

The introduction of Sister Ave began with James Palmaro of St. Augustine parish Park Slope reciting his poem “Another Candle.”

Palmaro, who is blind, met Sister Ave at a retreat in 2017 and said they’ve been in touch ever since.

“That’s the Dominican way,” he said on why he chose this poem to recite for his friend, “to light a candle to dispel darkness and that’s what she does.”

In her acceptance remarks, Sister Ave, who grew up in Holy Innocents parish in East Flatbush, spoke of the people, young and old, who have touched her life. She thanked her family and friends as well as her fellow religious. 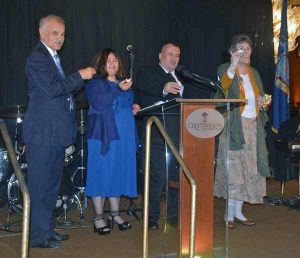 Sister Ave invited some friends to join her on stage to hold tea lights and sing, “This Little Light of Mine.”

She also called up to the stage several special needs adults she supports in St. Matthias’ parish in Ridgewood and Sacred Heart parish in Bayside and had them hold tiny tealight candles.

“Sing with me,” she then said, and led the entire room in the gospel song, “This Little Light of Mine.”

She encouraged everyone present to be lights for those less fortunate.

“She reaches out to those in need and helps them and that’s our mission,” said Sister Mary Pat Neylon, O.P., prioress of the Amityville Dominicans.

“She has an unassuming way and keeps her sense of humor even in suffering. We picked the right one to represent us,” she said.

Sister Ave’s suffering included a 2004 train accident that leaves her walking with a cane. But as one friend said, even a train crash couldn’t stop her.

So, as the night turned from dinner to dancing, there was Sister Ave – her cane held high like a modern-day Moses parting the waters of revelers – encouraging everyone to celebrate this joyous evening with her.

The proceeds from the Dominican Gala, estimated at about $150,000 for this year’s event, support the ministries of the Sisters of St. Dominic of Amityville in the New York area and as far as Puerto Rico.